They Won a Nobel Prize for Choosing Lithium, And Now You Benefit Too. 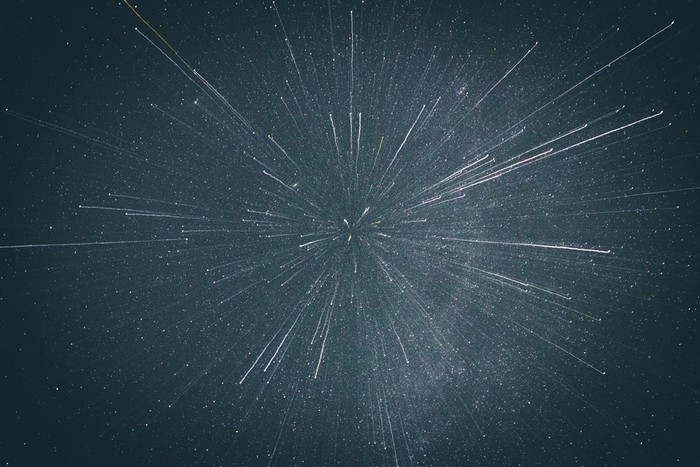 Yesterday morning we woke up to see a familiar name in the news as John B. Goodenough was announced by the Nobel Prize Committee, along with two others, as the recipients for this year's Nobel Prize in chemistry. We’ve written about John in earlier posts (See “A Week For Gratitude”) and can say we’re thrilled to see the recognition he, M. Stanley Whittington and Yoshino Akira received for the work they did over two decades in three countries that led to what one committee member referred to as “a highly charged story with tremendous potential”!

They Won, Our Customers Won

Since we launched our own Lithium battery in 2015, our customers have been winning their productivity challenges too. And not just any Lithium. Our unique chemistry of Lithium Iron Phosphate (LiFePo4) delivers a superior set of benefits of other Lithium chemistries, providing up to 3,000 cycles while maintaining over 80% of its original capacity!

Our unique Lithium Chemistry not only outpaces any SLA battery (including our own), but exceeds expectations for standard Lithium chemistries as well.

Here’s how each of the Nobel Prize winners contributed to the evolution of the world’s most important mobile power sources:

How Did They Do It? 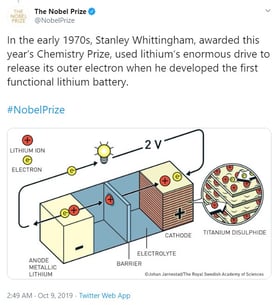 The compelling aspect of this year’s trio of winners is that they “collaborated” to bring us where we are today – but years apart from each other. Whittingham started the process that first identified Lithium for its potential while working at Exxon on the 1970’s. Goodenough doubled the capacity of those early models by adding Cobalt, and Yoshino discovered that using petroleum coke in place of some of the pure Lithium made it commercially viable by reducing the instances of explosions and fire (an improvement that was universally welcomed!).

See the illustrated progress as shown by the Nobel Prize Committee yesterday: 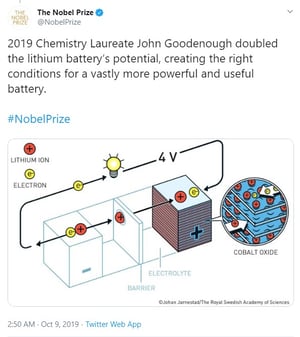 Lithium is the stuff of fairy tales, or science fiction stories. It is an element that was created shortly after the Big Bang. It’s pure state is a very soft, silver-white metal that is so unstable it that it is kept in oil to keep it from exploding. To make it sound even more like some king of magical material wielded by Elves in a Lord of the Rings story, it is also created when cosmic rays strike interstellar gas..

One can be forgiven for thinking that these scientists weren’t just creative or curious when they began their work with Lithium. They were quite possible very brave as well!

So we once again congratulate the three scientists who changed the lives of nearly everyone with their innovations that made power more mobile than ever. And by association, congratulate our customers too, who have been delivering improved efficiency every day with our humble contribution built on the shoulders of the scientists we recognize this week.

Learn More About How They Work 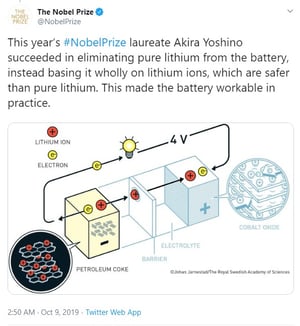 For those looking to nerd out with us a bit more about how these amazing batteries work, or why their cost of ownership far exceeds that of traditional SLA or standard Lithium batteries, read more here in our 2018 article “Understanding the Power of Your Lithium Power Pack”.