Understanding the Power of Your Lithium Power Pack

Two years after the launch of our PowerSwap NucleusTM battery pack, we’ve seen a lot of success stories from our customers who’ve upgraded from their original Sealed Lead Acid (SLA) power packs. Although Lithium is something we are all using day-to-day in our personal lives in our cell phones, laptop and almost any other rechargeable device we have, we still get a lot of questions from our customers and readers about some of the more basic aspects of our power packs.

For the record, Lithium as a battery chemistry is credited to John Goodenough, who first conceived of using Lithium at the University of Texas in 1996, where he still teaches mechanical engineering and materials science. More than any other innovation, the advent of Lithium as a battery chemistry arguably allowed for the advances in shrinking the size and durability of many of our devices in what would become the Digital Age.

How does a Lithium-ion battery Work?

The standard Lithium-Ion (LI-ion) battery that you use every day in your cell phone, laptop, mobile scanner, power tools and perhaps even your forklift or your car is comprised of five components:

The lithium in the battery is stored in the anode and cathode, while the electrolyte is the medium used by the positively-charged lithium to travel. When you are charging the battery, the cathode (which is a positive electrode) releases its lithium ions which pass through the electrolyte and the separator before they arrive at the anode (which is a negative electrode). When you turn on the device being powered from your battery, the flow is reversed, with the lithium ions now moving back to the cathode from the anode. This is the movement that generates the electrons that power your device.

The travel path for the ions is reversed when you are discharging the battery (i.e. when you are powering a device with it) as the lithium particles lose their positive charge.

Well, we won’t get much more technical than that. But in reality, the entire process is all managed within those five elements listed above, and it gives Lithium a big advantage over the SLA batteries that have been in use for over a hundred years.

Why Lithium over SLA?

It’s a great question. We asked that ourselves three years ago when we started down the path of creating our own power pack. Our existing SLA products are basically off the shelf products that we assemble ourselves and mount inside our own manufactured box to keep them all together and organized in one place. But the SLA solution always had a number of flaws, some of which we heard often enough from our customers to help us speed up the process for finding an alternative: 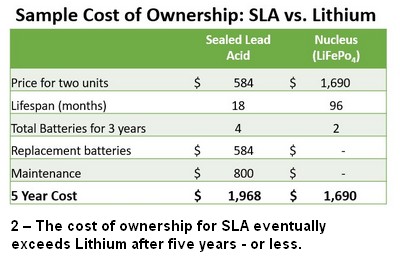 The chemistry of the Lithium option has obvious advantages over SLA on its own merits. But we also realized that once we took out all the weight of the SLA and were dealing with a unit that is only eleven pounds, it meant we could play with the form factor too. So we also made it swappable! Basically, we created an option to have a power “platform” with a single battery that could be used interchangeably across all of your powered carts of any type. And units that are on the floor 24/7 can keep moving without shutting down the workstation by loading a freshly recharged battery before removing the spent one. 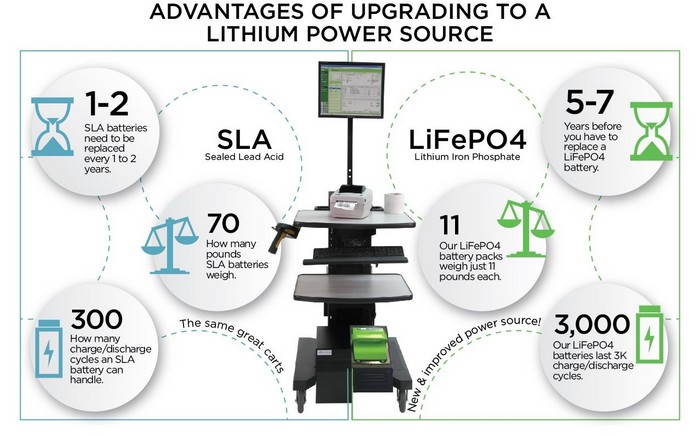 Why LiFePo4 instead of Li-Ion?

The chemistry “name” you see for various Lithium batteries is basically a reference to the material being used in the cathode element of the battery. The typical Li-Ion battery is usually a Lithium Cobalt Oxide (LiCoO2). When we sought out people who really know this stuff better than we do, we discovered the option of LiFePo4 and learned of a number of advantages:

As you can see, Lithium batteries, and specifically our chosen chemistry, LiFePo4 has a number of major advantages over other traditional SLA batteries, nickel-based rechargeables and even the typical Lithium-Ion units we use every day at home and work.

But SLA still retains a place in our business, because depending on the solution your business needs, it may sometimes just be the best option. This is common for our clients that generally have lower volume use, or just have a single shift on the floor or don’t have a fleet of carts where the swappability of the battery would provide an obvious benefit.

Have any questions about battery technology? Any experiences you care to share? We’re always interested to hear your ideas, let us know!

8 Common eCommerce Fulfillment Mistakes and How to Fix Them
3 Strategies to Fulfill Online Orders You Need to Try
How Lithium Is Enabling The Microfactory
Our Quick Take on Tesla’s Annual “Battery Day”
Topics: Nucleus Lithium Power Efficiency