Where are the choke points in your supply chain?

UPDATE: On Monday, March 29th, 2021, the Ever Given was freed and continued its journey northward, allowing for the passage of over 360 ships that had impacted about 15% of the entire world's container capacity. Bon Voyage!

Last week was the beginning of one of those rare weeks when you could tune into your daily news broadcast and hear your usual news readers interviewing supply chain analysts, shipping company representatives and logistics experts almost every day – a group of professional profiles that you almost never see on the national news!

Why? For those who have not been paying attention, the Suez Canal has been completely BLOCKED by a single freighter ship that got jammed up on both sides of the canal while trying to navigate during a severe windstorm. 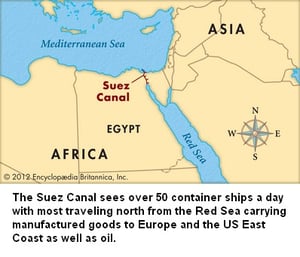 The importance of this event is far-reaching – it impacts economies in nearly every developed country in the world and indirectly impacts many others as well. With 13% of annual global trade passing through the canal in 2020 via the 19,000 ships carrying 1.17 billion tons of cargo, the impacts are going to reverberate through all supply chains as another 50+ ships get held up waiting to pass meaning at least 400 of them will be idling while you are reading this.

Think of something more local that might have a similar effect. Imagine a national retailer during holiday season supplying its 850 stores from six massive Distribution Centers it has around the country – and then imagine one of them has to shut down for a week with all of its contents locked inside with nothing going in or out. Now imagine the trucks that were arriving that day to unload, the empty ones waiting to be loaded, and the store shelves for that 13% of the stores being served going empty over the next week forcing shoppers to abandon your brand. That’s 110 stores losing sales, customers, and even employees after a week.

The incident with the Ever Given (which is being tended to by eight tug boats, dredging machines, the US Navy and more as we write this), is an example of the importance of finding the choke points in your supply chain and ensuring you don’t have a catastrophic weakness like this yourself. What are some of the key places to look for these “choke points”?

First of all, we should acknowledge that the events in the Suez Canal are a rarity. It has been open since 1869 and there is no known example of this happening in the last 150 years. This week might have been made more predictable by the ever-growing size of container ships. The Ever Given is one of the newer “New Panamax” class of ships that is 1300 feet long and can carry 20,000 containers. To understand how this is a newer danger to the canal – before the year 2000, container ships never exceeded 1000 feet and the canal is only 984 wide.

Technology changes mean that choke points in your supply chain that you did not have 10 years, or even 2 years ago, may now exist where you thought they did not. Here are a few to review:

There may not be a Warehouse equivalent to blocking to Suez Canal, but the first lift truck operator here may have come very close!

What’s The Best Place to Start?

While this may differ for every business, we generally recommend starting at home, and working your way outward. First take a deep dive into your Receiving process or picking process, for example. How many steps does the staff need to complete the process? Are there wasted touches, mistakes, or backups that can not be explained? Having an expert’s knowledge on your own processes and technology first then gives you the information you need to ask the questions you’ll want answered on the outside of your business from your suppliers and vendors.

And by all means, let’s hope a sandstorm never blows a lift truck off-course and block your Receiving Dock for a week!