What You May Not Know About Lean Thinking

The term lean thinking was coined by James P. Womack and Daniel T.Jones to capture the essence of their in-depth study of Toyotaʼs fabled Toyota Production System.

Lean thinking is a new way of thinking any activity and seeing the waste inadvertently generated by the way the process is organized by focusing on the concepts of:

The complete details can read in

The Essentials of Lean Manufacturing eBook.

Lean thinking was born out of studying the rise of Toyota Motor Company from a bankrupt Japanese automaker in the early 1950s to todayʼs dominant global player. At every stage of its expansion, Toyota remained a puzzle by being capturing new markets with products deemed relatively unattractive and with systematically lower costs while not following any of the usual management dictates.

"Lean thinking was born out of studying the rise of Toyota Motor Company from a bankrupt Japanese automaker in the early 1950s to todayʼs dominant global player."

In studying the company firsthand it appeared that it had a unique group of elders (sensei) and coordinators (trainers from Japan) dedicated to helping managers think differently.

Contrarily to every other large company, Toyotaʼs training in its formative years was focused on developing peopleʼs reasoning abilities rather than pushing them to execute specialist-derived systems.

"Toyotaʼs training in its formative years was focused on developing peopleʼs reasoning abilities rather than pushing them to execute specialist-derived systems."

These“sensei”, or masters in lean thinking would challenge line managers to look differently at their jobs by focusing on:

The complete details can be read in

The Essentials of Lean Manufacturing eBook.

“Aha!” moments by seeing someone behave in a striking way, or hitting upon a new idea by reading a book, visiting a workplace, or having an experienced sensei do something significant to trigger new paradigms.

Every day practice by the
daily use of “lean” practices

In the lean thinking tradition, the teacher should not explain but demonstrate – learning is the full responsibility of the learner. However, to create the proper conditions for learning the lean tradition has adopted some practices from Toyotaʼs own learning curve. The aim of these practices is not to improve processes per se but to create an environment for teachable and learnable moments.

The avoidance of waste has a long history. In fact, many of the concepts now seen as key to lean have been discovered and rediscovered over the years by others in their search to reduce waste. Lean manufacturing builds on their experiences, including learning from their mistakes.

Most of the basic goals of lean manufacturing are common sense, and documented examples can are seen with Benjamin Franklin.

Poor Richard's Almanack says of wasted time, “He that idly loses 5s. worth of time, loses 5s., and might as prudently throw 5s. into the river.”

He added that avoiding unnecessary costs could be more profitable than increasing sales: “A penny saved is two pence clear. A pin a-day is a groat a-year. Save and have.” 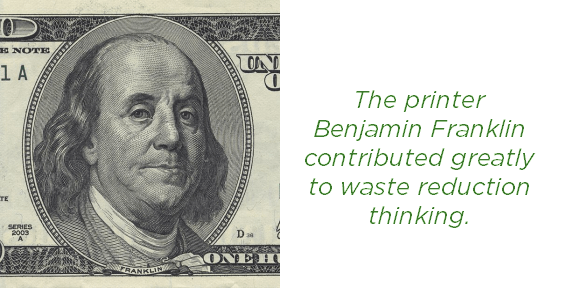 Franklin's The Way to Wealth says the following about carrying unnecessary inventory.

“You call them goods; but, if you do not take care, they will prove evils to some of you. You expect they will be sold cheap, and, perhaps, they may [be bought] for less than they cost; but, if you have no occasion for them, they must be dear to you.

Remember what Poor Richard says, 'Buy what thou hast no need of, and ere long thou shalt sell thy necessaries.' In another place he says, 'Many have been ruined by buying good penny worths'.”

Henry Ford cited Franklin as a major influence on his business practices, which included Just-in-time manufacturing.

Ford, in My Life and Work (1922), provided a single-paragraph description that encompasses the entire concept of waste:

"I believe that the average farmer puts to a really useful purpose only about 5% of the energy he expends.... Not only is everything done by hand, but seldom is a thought given to a logical arrangement. A farmer doing his chores will walk up and down a rickety ladder a dozen times. He will carry water for years instead of putting in a few lengths of pipe.

His whole idea, when there is extra work to do, is to hire extra men. He thinks of putting money into improvements as an expense.... It is waste motion - waste effort that makes farm prices high and profits low." 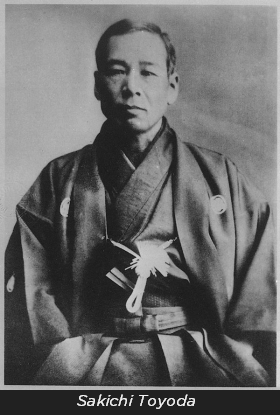 Toyota's development of ideas that later became lean may have started at the turn of the 20th century with Sakichi Toyoda, in a textile factory with looms that stopped themselves when a thread broke. This became the seed of automation and Jidoka. Toyota's journey with just-in-time (JIT) may have started back in 1934 when it moved from textiles to produce its first car.

"Toyota's journey with just-in-time (JIT) may have started back in 1934 when it moved from textiles to produce its first car."

Kiichiro Toyoda, the founder of Toyota Motor Corporation, directed the engine casting work and discovered many problems in their manufacture. He decided he must stop the repairing of poor quality by intense study of each stage of the process. In 1936, when Toyota won its first truck contract with the Japanese government, his processes hit new problems, and he developed the "Kaizen" improvement teams.

The discipline required to implement lean and the disciplines it seems to require are so often counter-cultural that they have made the successful implementation of lean a major challenge. Some would say that it was a major challenge in its manufacturing 'heartland' as well. Lean is about more than just cutting costs in the factory. One crucial insight is that most costs are assigned when a product is designed,

One criticism of lean perennially heard among rank-and- file workers is that lean practitioners may easily focus too much on the tools and methodologies of lean, and fail to focus on the philosophy and culture of lean. The implication of this for lean implementers is that adequate command of the subject is needed to avoid failed implementations. Another pitfall is that management decides what solution to use without understanding the true problem and without consulting shop floor personnel. As a result, lean implementations often look good to the manager but fail to improve the situation. Also, many of the popular lean initiatives, coming from the TPS, are solutions to specific problems that Toyota was facing.

Whether your responsibility includes a manufacturing plant, warehouse, distribution center or large retail operation, the story about lean thinking is something to consider as you train your team.

We have a new free ebook available.

If you found the information above interesting and would like to read further, get the free ebook here.