The Hard Facts and Data on Your Space Management Issues 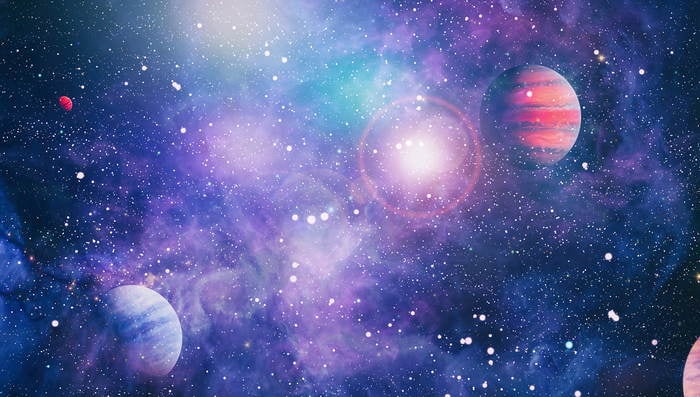 In our annual customer satisfaction survey, “Space” and “People” continued their five-year run as the top two issues that keep facility managers up at night. But what specifically is it about these issues that weigh so heavily on the minds of every type of customer we have – big, small, high-tech, simple, etc. An annual survey by FLEXE, a warehouse services group that runs a marketplace of over 800 warehouses provides some insights into the specific aspects of space management that are a concern for so many customers.

One ratio that is worth watching year to year is the balance between those with excess space and those who feel they require more. As shown in the chart at right, there was a large increase in those who said inventory exceeds capacity and a smaller decrease in those who expressed that capacity exceeds inventory. Taken out of context, this could be seen as an indicator of a slowing economy as inventory bulges and fills up warehouses, but given the heated pace that continues in 2018, this is very likely about a potential space shortage as demand outpaces new building. One of our survey respondents was typical, “We are growing fast at over 10% per year. While we are trying to maximize warehouse space efficiently, we also realize we may need to expand it on an adjacent lot next year too.”

Unsurprisingly, seasonality is the biggest driver of fluctuations in inventory and capacity at 80% for those reporting excess inventory (and essentially unchanged at 78% for those reporting excess capacity). Despite the steady growth of eCommerce over twenty years that makes nearly everything available year-round, retail purchase patterns regarding revenue are largely unchanged with about 60% of all annual retail sales coming after Labor Day. There is no getting around the need for more space in the last four months of the year. However, some of the issues stem from other problems like forecasting (33%), lead-time variability (32%) and discount-based forward buying (28%). 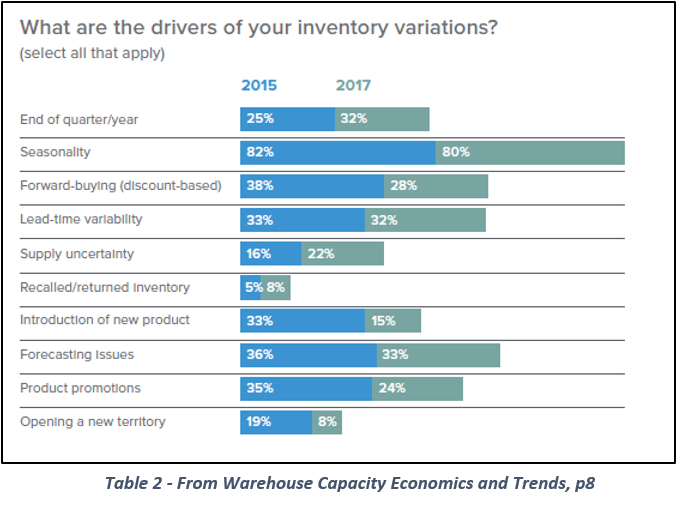 It’s pretty clear why “space management” is the perennial leading issue for facility managers. The peaks and valleys of demand are not something that can be managed – changing decades of buying patterns and behavior is not in the skill set of any company’s facility management team – nor can their marketers do anything about it (despite the appearance of Halloween candy in stores this July already, it doesn’t change the basics!).  So what can be done about it?

FLEXE illustrates a simple concept that applies to any business that is looking to manage peaks and get the right balance between fixed and variable costs. The table below shows six models (three each for businesses with single or multiple peaks) and how they might be dealt with: 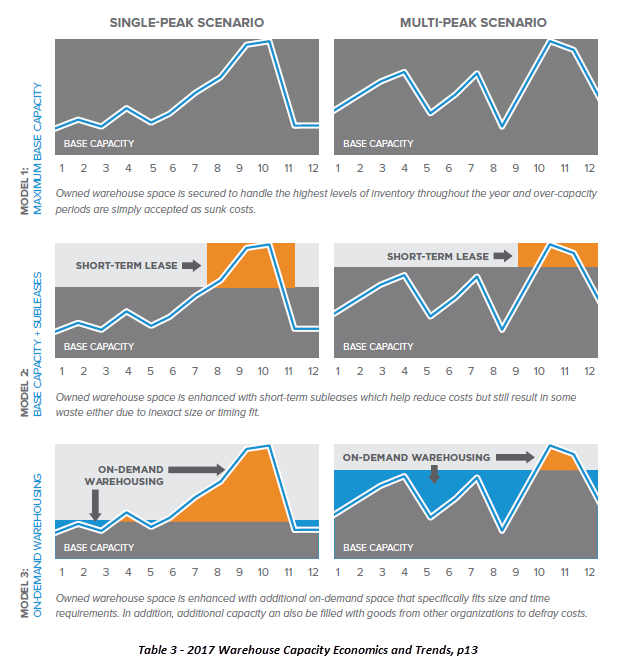 In Model I, the facility has been designed to absorb the peak seasonality, which saves a lot of gyrations during the year but could potentially be very expensive in higher-rent regions when the full cost of all the space needs to be paid for every month.

In Model II, businesses use short-term leasing arrangements to gain additional space to cover peaks as needed. This may or may not be advantageous depending on where the additional space is, extra trucking required to move it, and if it is used as an additional picking and shipping location or only as a reserve location.

Finally, Model III illustrates the hybrid model which FLEXE has built its business on – matching excess space with need. In this model, managers can rent space short-term to handle peaks, but also turn their excess space into revenue by leasing out their excess capacity to other businesses where the peaks exist at different times of the year. It essentially creates an ecosystem where almost any space can operate as a temporary 3PL.

How They Do It Now

The peak management models illustrated above are not the norm yet. Most company’s culture, staffing, and systems make it difficult to visualize the scenario where excess space is being used by an outside business. It also raises security issues that may not always be about protecting valuables, but just about getting your house in order as it may not be suitable for a cohabitation model like that one without a lot of process and behavioral changes.

Until that time, how do managers cope?

A big trend in the last two years is a move from short and long-term leasing to a more primitive “Off-site storage.” This indicates that most managers are looking at outside space purely as a reserve storage solution while keeping their value-add skill sets like picking, Q&A, etc. in the main facility. This is coming mostly at the expense of short-term leasing, which might also be driven by shortages and resulting higher costs for that option too. 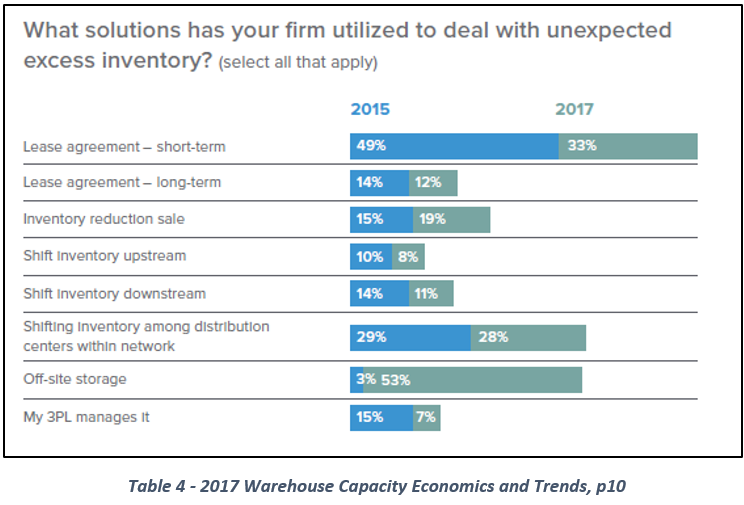 One aspect of the “space marketplace” model that FLEXE provides is that it gives a facility manager the most flexible set of options to deal with the various peaks encountered via seasonality, consumer trends, trade fluctuations, etc. A big part of making this work in a very active facility is learning how to think like a 3PL, where multiple businesses might be operating out of the same location. How would you change your process and workflow design if the resulting savings in floor space meant you could convert it into revenue? How would you train or recruit differently?