The Complex Logistical Challenges of Vaccines 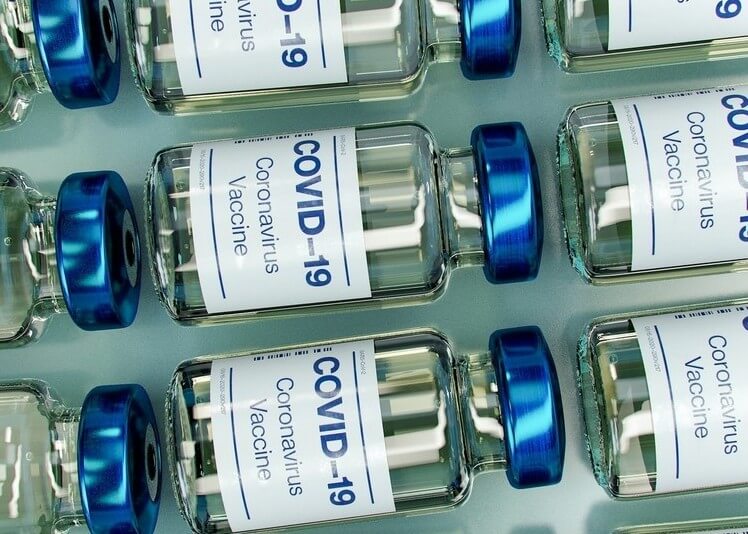 Humans have been benefitting from vaccines for over two centuries. But the process for developing and distributing vaccines effectively has been neither neat nor direct. As the COVID-19 pandemic continues to rage across the country, the sense of urgency for a solution has never been greater.

As a group of potential vaccines for COVID seems within reach, the next hurdle facing experts is how to safely distribute and administer them to hundreds of millions of people. It’s an unprecedented logistical challenge.

Unlike most other medical breakthroughs, the public is being made aware for the first time of the extensive details of what goes into the process – how it was developed, who’s involved, how it’s being paid for, the hiccups, the concerns, the regulatory hurdles (or potential shortcuts) and so much more. For this particular vaccine, we are also seeing how much variance there is in how vaccines get stored, transported, distributed, and delivered. But historical awareness can help inform some short and long-term solutions to the issues currently faced relative to vaccine production and supply.

What We Know About Early Vaccine Logistics

Edward Jenner, a country doctor in England, is credited with coming up with the first vaccine in 1796 when he took the pus from a cowpox lesion on a milkmaid’s hand to inoculate a small boy against smallpox. Logistically, distributing this type of vaccine initially required sharing the knowledge with health experts around the world.

Once accepted, many countries began mass inoculation programs. The Spanish government adopted a ten-year campaign to bring the smallpox vaccine to its Asian and American countries. In an expedition beginning in 1803, Doctor Francisco Xavier de Balmis brought the vaccine to seven countries in a chain of arm-to-arm distribution.

Advances in Logistics for Vaccine Distribution 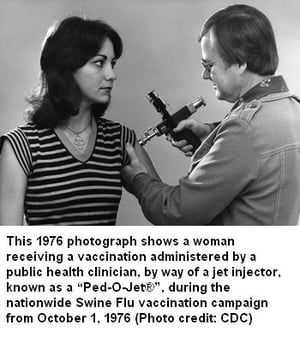 In the nineteenth century, there was an increased shift away from government entities controlling vaccines in favor of commercial enterprises. The idea was that private companies would foster superior production, increased competition, and lower costs.

But, over the past 50 years, many larger pharmaceutical companies have backed off from the vaccine business because it is encumbered by regulatory barriers and is considered low-margin. For example, ten of the basic childhood vaccines (chickenpox, MMR, DTaP) are produced by just two companies.

Still, the research and development of vaccines takes place largely in the private sector. And public organizations like the World Health Organization (WHO) and the Centers for Disease Control (CDC) will coordinate distribution where appropriate. The WHO does R&D for vaccines where there are no existing options or ones that are being underutilized. Its research arm also helps to improve the introduction and monitoring of vaccines once introduced.

Even though governments may contribute to the development and distribution of certain vaccines, their prices continue to soar. GlaxoSmithKline puts the cost of its DTaP-IPV vaccine at $32.75 per dose a decade ago compared to $42.56 today, a 30% cost increase.

What’s included in those costs? According to the WHO, some of the costs associated with introducing a new vaccine include: 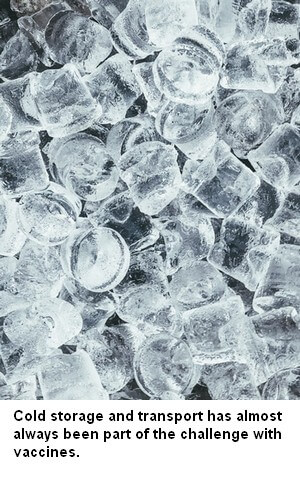 With reference to the COVID-19 vaccine, there are a lot of players and moving parts emerging, creating unique challenges to successful distribution. This pandemic wasn’t even a blip on anyone’s radar a year ago, yet the world is braced for mass inoculation against a deadly virus.

Typically, vaccines take an average of 10-15 years to develop, and the fastest vaccine ever developed until now was the mumps vaccine that took four years. To say that this will be the most logistically challenging vaccination campaign in history might be an understatement. There’s every reason to be optimistic, but some of the potential hurdles that lie ahead are substantial.

There are currently some 250 COVID-19 vaccine candidates, but just three have become frontrunners to have a vaccine approved for distribution in the next one to two months. Those are Pfizer, Moderna, and AstraZeneca/Oxford.

As public health officials get ready for the largest vaccine distribution campaign in history, they must also tackle some unprecedented cold storage requirements. In the U.S. alone, Pfizer has committed to producing 100 million doses of its vaccine in December with the option for another 500 million more. In total, the company says it has the capacity to produce 1.2 billion doses within the next year.

The challenge with the Pfizer vaccine is that it falls apart if not kept in extreme temperature environments (the other vaccines don’t have this constraint). Specifically, it needs to be chilled to minus 70 degrees Celsius (minus 94 degrees Fahrenheit) until it’s time for injection. This sounds like an impossible task, but Pfizer is trying to help:

The vaccine can be stored in the thermal shippers with dry ice for up to 15 days when the dry ice is refilled as well as in normal hospital refrigeration units for an additional five days. 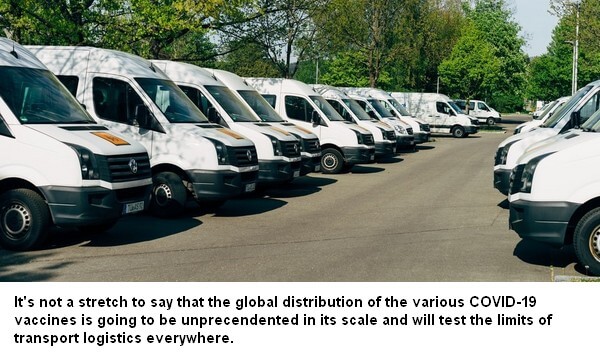 During the first half of 2020, managing the PPE supply chain was challenging enough. But, things were running smoother, and plenty of lessons were learned by the Summer of 2020, particularly when it came to distributing COVID-19 testing kits that were once in limited supply.

Given the urgency of the pandemic, the vaccines are likely to be transported via air for longer distances. We’re talking about roughly 15,000 flights over two years to move 10 billion doses on pallets.

While aviation has a solid track record with regard to refrigerated cargo, dealing with freezing temperatures is another matter. Dry ice adds a significant amount of weight to a shipment, which will add to the cost and time for distribution.

Further, what happens between the airport and the final destination will be critical. One of the most complex parts of the logistics chain will be the last mile from the airport or local frozen warehouse to the distribution site. As long as additional dry ice is available, shippers can achieve positive results. 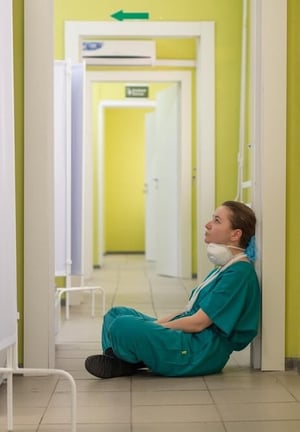 Unfortunately, there remains a shortage of trained healthcare staff to administer the vaccine, particularly in the U.S. Even though healthcare workers will be the first to  receive the vaccine, this industry has been hard-hit by the pandemic.

If there are any flu-like side effects associated with the vaccine, there’s a chance that providers will have to be sidelined in an abundance of caution. For this reason, many facilities may refrain from vaccinating everyone at the same time. These same workers will also need to be trained in handling the storage and administration of the COVID vaccine.

As the vaccine infrastructure takes shape and more advanced versions of vaccines are developed without such extreme requirements, the logistical challenges may not be as severe. In fact, Pfizer is already developing a powdered version of its vaccine with hopes of a 2021 release.

5 Ways to Recover from Supply Chain Disruptions
5 Reasons Why Your Business Needs to Focus on Reverse Logistics Right Now
8 Common eCommerce Fulfillment Mistakes and How to Fix Them
3 Strategies to Fulfill Online Orders You Need to Try
Topics: Predictions COVID-19 Physical Distancing