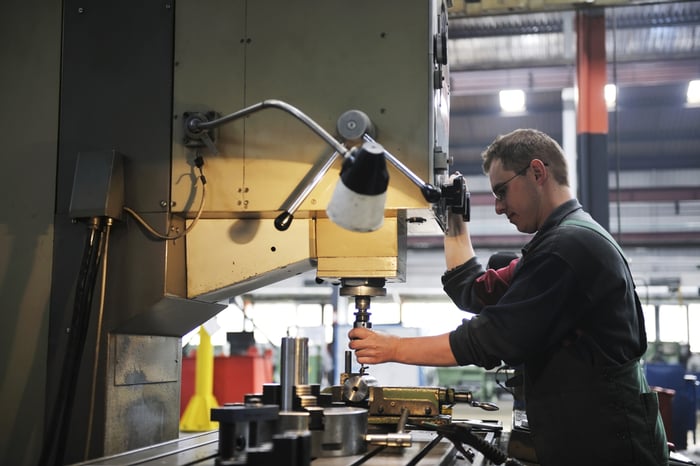 Manufacturing is a broad term that is thrown around loosely in the news and in the public domain.

We've heard for decades about the "decline of manufacturing", but depending on how you measure it, it's not always clear there has been a decline. Frequently a decline of jobs in manufacturing is reported as implying a decline in production, but it is often a result of higher productivity that comes from more automation, improved supply chain logistics and systems. This itself can lead to a decline in employment.

But what is the current state of manufacturing in the US today? The United States Census Bureau includes this as one of the specific areas they measure very regularly, and today we have some recent data from 2018 - in infographic form.

How Do You Define "Manufacturing"?

The official definition of manufacturing comes from the Census Bureau's North American Industry Classification System, or NAICS. All business establishments in the United States are classified into categories based on how their output is produced, with one such category called "manufacturing" –to be "engaged in the mechanical, physical, or chemical transformation of materials, substances, or components into new products." As unspecific as it is, the Census Bureau recognizes that "The boundaries of manufacturing and other sectors… can be somewhat blurry." Some might be surprised that some establishments like bakeries, candy stores, custom tailors, milk bottling and pasteurizing, fresh fish packaging (oyster shucking, fish filleting), and tire retreading are included, but it we think about the processes that go into creating the products coming from these businesses, it is not hard to see them as "manufacturers" as well.

A Look at The Data:

How Does it Compare to the Past?

As the graphic illustrations imply, manufacturing has some very big strengths in our current economy. But the myth of decline is not entirely a myth, nor is the gushing over its Renaissance entirely appropriate. Since peaking in 1979, manufacturing jobs have declined from their peak of 19.4 million to 12.4 million in 2017 (which is higher than the low hit during the recession in 2010). Output however, is over 80% higher than it was thirty years earlier, including a 166% increase in durable goods manufacturing, which is the sector most frequently discussed in the "decline of manufacturing" stories we often see. Despite this increase, total manufacturing output was just 18.5% of the US economy in 2017, receding from 23% in only 1997.

Clearly the improvements in productivity have made a difference - output is much higher than ever with far lower employment than ever. With labor at a premium and a quality workforce difficult to find and retain - what is your business doing to make similar gains in the next five years?

An Introduction to Quality Control in Manufacturing
How Lithium Is Enabling The Microfactory
What is “Industry 4.0”?
Warehouse Labor Best Practices
Topics: Manufacturing Infographic Research