Water Spider or Whirligig? The Entomology of Lean Manufacturing 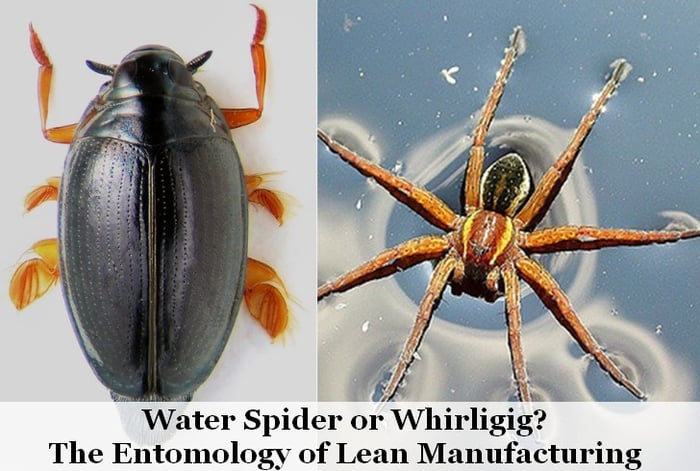 Lean practitioners are probably aware of the “Water Spider” which is an important role on the floor of the manufacturing shop. And you may also know that it, like many other lean terms like “Kanban,” “Gemba” and “Kaizen,” it originates from the Japanese language, where lean got its start.

Most of the lean terms that come from Japanese stayed in Japanese, while “water spider” was perhaps too much to handle without translating: “Mi-zu-su-ma-shi (水澄まし).  Unfortunately, the Japanese name is really for an entirely different kind of species – the “Whirligig.”

Before anyone jumps on to their LinkedIn profile to change their title, let’s first assume that the common usage of “Water Spider” in English won’t be changing soon. Then look at the role itself and to decide if “Whirligig” is a more appropriate name we can lobby for one day in the future. Just WHAT is a “Water Spider” role and what do they do?

The Setting Does Not Involve Aquariums

In manufacturing, lean principles promote the concept that each production floor worker, each station, etc. should be focused on producing maximum value-add with their work, with as little variation to deal with as possible. Part of the task in making each stop in production more lean is to isolate any waste or inefficiency found, then remove it from that part of the process to optimize it.  In most production facilities, the most common non-value add task a worker has is the movement of parts and supplies between workstations, or their replenishment. Having someone who is focused (for example) on some delicate assembly work requiring nimble fingers and good concentration move back and forth between their station and another to collect more parts for their work is a very wasteful task in many ways. Aside from the time wasted with extra footsteps, it may also create a type of work where this worker can be more easily injured (i.e., lifting or moving bulk quantities of small parts) doing something very different from a job that requires skill and dexterity. Breaking their concentration and rhythm also will contribute to lower productivity in some cases.

It is exactly this type of situation for which the Water Spider role was created.

Isolating Waste and Inefficiency in One Place

“Isolating the waste and inefficiency in one place” means removing the wasteful tasks. In this case, the carting of parts and pieces between workstations – from the workers who are supposed to be focused on value-added pieces of work – and depositing them all into a single place where they can be examined together and possibly reduced or eliminated. The Water Spider then is essentially the “owner” of the non value-add parts of the work on the floor. A common example is the carting of pieces and materials to every workstation on the floor to ensure every worker has what they need to focus on their core tasks.

In picture 2 to the right, the Water Spider has a custom-built cart equipped with a laptop, scanner and mobile power that lets them stay connected while moving between stations at both planned intervals and potentially unplanned ones too when there is a need.  While traditional manufacturing disciplines might look at this role as a “gopher” that is low on the pay scale and possibly without many skills, lean demands more from your Water Spider if you expect to make the most from the role.

Traditional manufacturing had a role that appeared to be similar, sometimes referred to as a “Material Handler,” and usually playing more of the role of “gopher” with pay, status and upward mobility set accordingly. In other words, it is not a position of great importance or given a lot of attention, and whoever was doing it was seen as easily replaceable. In lean, the Water Spider should be considered a much more important role.  They will need to be someone who is observant, as they will ultimately learn quite a bit about every sub-process where their work takes them. Key characteristics of the role include:

Now, if we borrow a description of a whirligig, what do we find?

They are known for “their habit of swimming rapidly in circles… and for their gregarious behavior…and are also notable for their divided eyes which are believed to enable them to see both above and below water”.

“they occupy areas where water flows steadily and not too fast, such as minor rapids and narrows in leisurely streams.”

The description almost gives a great visualization of how we just described the role of “Water Spider,” and the diagram below “translates” it into a visual of an actual production facility: 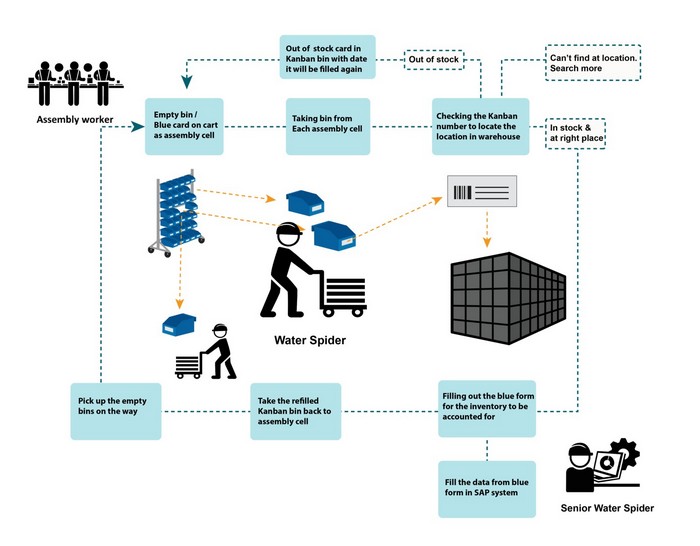 But the Whirligig analogy goes even farther. When you put together qualities like “Knows ALL the processes, communicates well, gets along with everyone, always helps with the unexpected, keeps the flow moving, etc.” what else does that sound like?

And here’s the real difference with the traditional manufacturing approach to “material handling” personnel. A Water Spider should be someone who has potential to do more. They will ultimately learn the whole process better than any of the owners of its parts. That is a foundational type of experience that creates the potential for leadership given their ability to see and understand the big picture and ensure each part is resourced to be optimized.

Whether your facility continues to use the “Water Spider” as is or give it a facelift and be the first to promote someone to “Whirligig,” do ensure you keep in mind the full potential and value of the role to your manufacturing process.

Check out our award-winning new technology that can scan any package in any orientation, and even takes a photo of every item for tracking and claim protection.