How Lithium Is Enabling The Microfactory

The rapid technological advancements and growing adoption rates of battery power are making themselves visible on a growing scale and having an impact well beyond the most familiar uses. While seeing an electric car is now commonplace, the evolution of car production is only now starting to incorporate the possibilities for manufacturing in a radically different way.

One of the failures of imagination we often have with new technologies is to stand far enough back to perceive the full range of changes that would come from it. Navies continued building bigger battleships even after aircraft carriers made them irrelevant, and despite its romanticized history, the Pony Express actually started AFTER trans-continental telegraph and railroads were being planned and built.

The world has welcomed the move from lead acid batteries to more efficient, lighter and cleaner Lithium, but have we fully comprehended the bigger picture of changes the change of chemistry implies?

What if it turns out that rechargeable Lithium power leads to an entirely new approach to manufacturing?

Electric Vehicles Made In Your Neighborhood

Arrival is a UK-based electric vehicle manufacturer backed by UPS who is innovating a new approach to manufacturing that highlights just how much potential change we might be seeing in the future. While a traditional auto or truck factory requires at least 2,000 workers and often over a Billion dollars of capital to build an assembly line to produce hundreds of thousands of cars each year, Arrival’s approach will produce far fewer vehicles, but at a cost much lower than other electric vehicles or even most diesel varieties in the same class.

By building a series of small factories that cost only about $50 million per site, Arrival can easily set up vehicles production in multiple locations at a fraction of the cost of a traditional factory and take advantage of local labor sources and markets.

If successful, this deployment of the “microfactory” approach has the potential to impact all auto (and other electronics) manufacturing.

What is a “Microfactory”?

The concept of a “microfactory” was actually originally proposed in 1990 by the Mechanical Engineer Lab (MEL) in Japan, and were originally imagined to be very similar to what Arrival is bringing to life today. The main advantage at the time was to save on resources as they would require less space, energy, materials and time. They were also imagined to be highly automated – going as far as not only automating assembly and material handling, but even systems to evaluate tool deterioration and quality control. 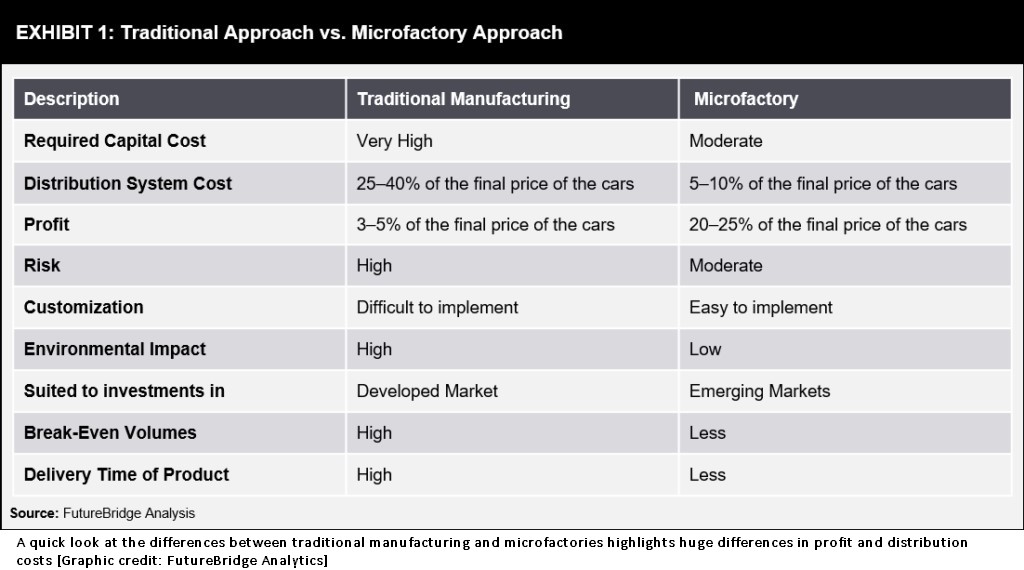 At the time this was conceived of in 1990, robotics in factories were still rare, and 3D printing was not available. What made this a possibility in 2021 has been the rapid advances in digitalization, miniaturization and mass customization over the last thirty years. But it’s very possible that the Lithium battery will have the biggest impact on making microfactories a possibility – not because factories run on them – but because the transition to them by the auto industry is providing the best candidate to date for making them work as envisioned.

The Radical Changes in Vehicle Production 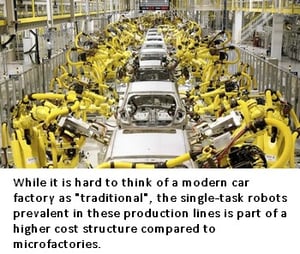 Just how does a Microfactory for auto or truck production work? The Arrival model uses six separate “clusters” of robots connected via a motorized platform which moves the assembly between them. Unlike traditional robots in auto factories, Arrival has developed theirs to do more than one task, allowing for more of the assembly to happen in one place – further reducing the space and capital requirements.

But Arrival is taking things to another level. Other changes they are making include:

Arrival’s model is still unproven. Over-reliance on robots was blamed by Tesla as the main cause of their delays in production of their Model 3 in 2018. But the use of composites means they have a much simpler assembly process because their use in place of stamped steel parts means they can eliminate the paint shop, stamping presses and welding robots required in legacy steel-based auto production facilities.

How Did Lithium Make This Possible?

The reason why all of this is possible? Lithium Batteries. The ability for the latest batteries to carry the power required for a car means that electric engines are now reliable – resulting in HUNDREDS of fewer parts, especially moving parts, and the elimination of various fluids for lubrication, cooling, etc.

With the reduction in parts making assembly easier and faster, the availability of the battery itself is the lynchpin in making the microfactory possible. While other industries are already deploying them, there has yet to be anything on the scale and visibility of the auto industry.