Our offices will be closed Nov. 24-25 for Thanksgiving.

It’s been said that Ginger Rogers was more talented than Fred Astaire because she did everything her dance partner did but backwards and in high heels. In a sense, food and beverage (F&B) manufacturers and distributors can make a similar claim when compared with companies that sell other kinds of products: In several key areas, they face a much higher degree of difficulty.

F&B companies must move raw materials and products in much the same way as other companies, but they also must deal with stringent food safety regulations, cold and wet working conditions, preserving the cold chain on frozen and refrigerated goods, fast-moving consumer staples that expire quickly and low profit margins. 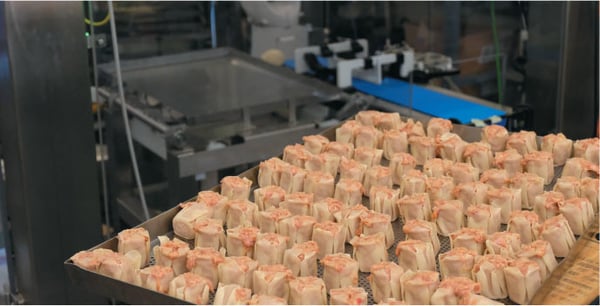 In June, Allied Market Research published a report estimating the global cold-chain tracking and monitoring market to be worth $4.6 billion in 2020, with that figure expected to climb to $15.2 billion by 2030. That huge expense reflects just one of the challenges facing the companies that keep America well fed.

"If you stick somebody in a zero-degree environment all day, that’s a hard job," he said. "That’s why efficiency is so important. They’re trying to get as much as they can out of the people they have because the labor situation is so unpredictable right now. I’ve been at warehouses where a third of their workforce didn’t show up that day, and you can’t really operate a business that way."

In response to the challenging business environment, F&B companies are changing their operations in numerous ways. Here’s a snapshot of four industry trends from supply chain experts helping F&B companies boost their throughput.

F&B companies want to place inventory as close to consumers as possible to speed up order fulfillment, which is leading to an increase in the number of micro-fulfillment centers and dark stores in use, according to Glenn Lundgren, regional sales director for the central United States at MHI member JLT Mobile Computers. The company makes durable vehicle-mounted computers, tablets and handheld devices for the industrial space.

Micro-fulfillment centers in high-population areas allow retailers to address seasonal product demands more efficiently and to restock the 20% of products that account for about 80% of sales more quickly and reliably, Lundgren said.

At the same time, however, F&B companies recognize that size matters, especially in light of increasing order volume and plans for future growth, he said. He pointed to the April announcement that Smithfield Foods was partnering with Lineage Logistics to build an enormous, automated distribution center (DC) in Olathe, Kansas.

The DC will span almost 20 million cubic feet and will automate 97% of product movement throughout the facility, the companies said. It will have 18 automated cranes to move inventory and will feature one of the largest temperature-controlled layer-picking systems in the world. Layer pickers disassemble and reassemble pallets of goods, a process traditionally performed manually.

"Micro-fulfillment centers are getting a lot of use on the retail front, but from the production side, I think you’re seeing that bigger is better," Lundgren said. "That new plant will have more than 62,000 pallet positions, so get your mind around that. I mean, it’s huge."

Getting serious about automation

With rising wages and supply chain costs, F&B companies are looking farther out when evaluating whether it makes sense to invest in automated equipment, according to Tom Swovick, director of market development for the F&B sector at MHI member Dematic.

Given the likelihood of a prolonged labor shortage, the expectation for a return on investment in only two to three years isn’t as prevalent nowadays, he said.

"When you look at a seven-year or 10-year period, all of a sudden, the return goes through the roof because it’s a great investment," Swovick said. "It just doesn’t pay for itself in a year or two."

Mandy Dwight, vice president of business development for MHI member RIOS Intelligent Machines Inc., said F&B companies are searching for ways to grow their business with the same amount of labor they’ve had before or, more likely, even less. Her company offers a range of automated solutions, including F&B packaging and robotics, as a subscription service.

"We’ve seen an uptick in the need for automation, specifically robotics, for packaging, especially the secondary packaging of packaged goods," Dwight said. "We’re finding that companies sometimes can’t meet their production numbers because of the labor shortage, so that’s driving them to consider robotics for the first time."

Ledversis, of Newcastle Systems, said one salad-dressing company’s highly automated distribution center offers a window into this trend. An automated storage and retrieval system (ASRS) takes pallets away from the unloading dock to be stored and brings them back to the loading dock to be shipped. The task is relatively easy since each pallet contains only one flavor of salad dressing, he said.

"I don’t think I saw more than two or three people in the whole place," Ledversis said. "They did this because they don’t have confidence that they’ll be able to get workers, so even if the ROI is five years from now, they don’t care because now they don’t have to worry about finding people."

Advances in automated solutions are helping F&B companies with more complex tasks such as mixed-case order fulfillment, said Swovick. An F&B company might produce soda, potato chips and candy at three different plants, for example, then send those pallets to a mixing center, where they’re broken down and reassembled into "rainbow pallets," he said.

The colorful name refers to the external packaging of the various products packed together on a pallet and then sent to a retailer’s warehouse or store. Shipping numerous products together through a mixing center eliminates the need for multiple smaller deliveries from the same F&B manufacturer, Swovick said.

"They want one delivery of all those products so you tie up that dock for as little time as possible," he said.

Manufacturers of material handling equipment are tailoring their products to the challenging conditions at F&B facilities. The chemicals used for the nightly wash-down routines at some F&B manufacturing plants can be corrosive to metals such as aluminum, for example, according to Clinton Smith, co-founder and chief technology officer at RIOS. So, the company uses stainless steel alloy 316 or specialized plastics that can hold up to that exposure long term, he said.

Similarly, JLT Mobile Computers places an adhesive film atop its computers’ touchscreens so that if the glass breaks, none of it will fall into food or equipment, causing the shutdown of that production line due to food safety concerns, Lundgren said.

The computers are built to withstand humidity, moisture, corrosion, hot and cold temperatures and the vibration associated with a forklift zipping along concrete floors, he said. Sealed accessory and peripheral ports along with flat-panel displays prevent airborne contaminants from entering into the devices.

Along those lines, Newcastle Systems manufactures its EC-Polar Series of industrial powered carts that can operate for eight to 16 hours in temperatures as low as -4 degrees.

The pandemic may have dealt a deathblow to the just-in-time supply chain model, as manufacturers now look to stockpile key ingredients and retailers build inventories of their core product offerings. Combined with SKU proliferation, this swift shift to the just-in-case inventory model has left many F&B companies with insufficient storage space, according to Swovick.

The focus on sustainability also is driving this trend. Since manufacturers are seeking to reduce their environmental impact by using thinner packaging materials, the common practice of stacking pallets now comes with a higher risk of damaging products, Swovick said. Automated vertical storage solutions, therefore, often provide the most effective way for companies to add capacity without expanding their facilities.

Some F&B companies are using these systems in creative ways. Swovick said Dematic recently installed a large system for a company that grows crickets as a source of protein, and in another example, a vertical farm on one acre of land is being used to grow about as much fruits and vegetables as 100 acres of farmland. Yet another company is using an automated storage and buffering system to grow the fungus used for "mushroom leather," he said.

Supply chain executives and their bosses now want easy access to online dashboards tracking key performance indicators in real time, she said. A good warehouse execution system makes relevant data available from one end of the supply chain to the other and reduces the potential for human error along the way. It even simplifies interaction between F&B companies and third-party logistics providers (3PLs) that may be handling their order fulfillment.

"They’re looking to pull together their transportation networks, their warehouse network and their labor network," Chesley said. "There’s really starting to be a reporting and visibility revolution in supply chain, where the norm of having all of your data and visibility siloed is being challenged, and there’s an expectation that everyone has true visibility into the operational side of the business.

"If you’re pulling all of your data and systems together so that the food and beverage company can update statuses across the supply chain with the click of a button, then you’re really mitigating the risk within your 3PL networks."

Inside the warehouse, F&B companies are using data to gamify their operations, boost employee engagement and improve retention, Chesley said. Longbow Advantage, for example, installs digital boards that display each employee’s KPIs in real time. Managers can then incentivize and reward the employees who reach their production goals, and coach and retrain those employees who fall short.

The idea is that by helping employees get better at their jobs and improve their skills, companies are less likely to lose them, Chesley said.

"In today’s labor market, you’ve really got to be much more focused on engagement, retention and incentives as opposed to recruiting new employees since it’s so hard to get new folks in now," she said.

"That’s been one of the biggest shifts that we’ve seen over the last year."