Make the Case for Mobile Power in Receiving:

Why Mobile Power on the Shop Floor?

Pushed to do more with less, and to keep workers as productive as possible in the midst of a labor crunch, managers in manufacturing need state of the art tools that help them improve processes while also minimizing errors and ensuring high levels of quality.

The Retail Point of Sale Revolution:

Mobile POS technologies are transforming the brick-and-mortar retail.  Transactions and processes once tethered to fixed cash registers at the front of a store are being shifted to product aisles and outdoor venues. Keeping up with the news, here are a few highlights of trends in U.S. manufacturing.

The Institute for Supply Management, a trade group of purchasing managers, said Monday that its manufacturing index fell to 53.5 in January from 55.1 in December. That is the third straight drop and lowest since January 2014. Still, any reading above 50 signals expansion.

Economists weren't overly concerned by the report. Most said it is consistent with steady growth in the first quarter.

"This decline is no reason to panic," said Paul Ashworth, an economist at Capital Economics, in a note to clients. The report probably reflects the impact of the stronger dollar on large U.S. manufacturers that export many of their goods, he said. It does not capture the services firms, like retailers, that are benefiting from cheaper gas, which has lifted Americans' spending power, Ashworth added.

Bradley Holcomb, chairman of the ISM's manufacturing survey committee, said that cheaper oil is benefiting many manufacturers by cutting their energy costs. Article

The abroad misunderstanding dampened a U.S. economy in a final 3 months of final year. Exports rose during a slowest gait given a commencement of a year. Meanwhile, imports, that turn cheaper when a dollar rises, jumped. The wider trade opening shaved enlargement by a commission point.

China’s factory sector unexpectedly shrank for the first time in nearly 2-1/2 years in January and businesses to see more of gloom, an official survey showed, raising expectations that the policy will be more action to forestall a stronger cooling.

The official purchasing managers ‘ Index (PMI) fell to 49.8 in January, the National Bureau of Statistics said on Sunday, a low-most recently in September 2012 and just below the 50-point level that separates growth from contraction, on a monthly basis.

The December level was 50.1, and a Reuters poll saw a better result, 50.2 for January. Only one of 11 economists in the survey forecast January contraction.

Most of the PMI indices showed a downward trend, which indicates that the current economic growth is still in a downward trend,” said Zhang Liqun, an economist at the development Research Center, a state think-tank.

Some economists said the January reading was mostly downbeat, as it is suggested that the factories did not enjoy a normal spike in business before China’s annual spring festival holiday, which falls in mid-February of this year.

Even with the news of slowdown in January, predictions says 2015 will be a good year for manufacturing and factories.  Here are a few predictions by John Zegers on OnlineTMD.com:

How Newcastle Systems can help:

We offer mobile carts with portable power to have an immediate impact on productivity, accuracy and profit.  Read our case studies to learn how investing in portable workstations may be the best  Watch how MSC Industrial Supply integrated mobile powered workstations in the case study video: 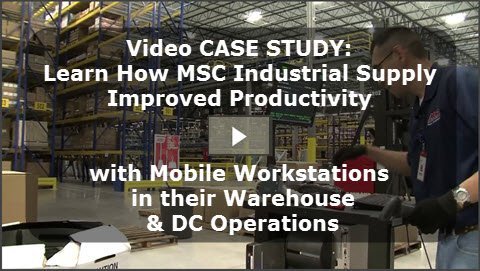 2020’s Short-Term E-Commerce Response is Your Long-Term E-Commerce Strategy
Our Quick Take on Tesla’s Annual “Battery Day”
What is “Industry 4.0”?
They Won a Nobel Prize for Choosing Lithium, And Now You Benefit Too.
Topics: Manufacturing Trends